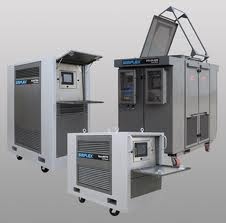 What is a Load Bank?

However, unlike the "real" load, which is likely to be dispersed, unpredictable and random in value, a Load Bank provides a contained, organized and fully controllable load. Consequently, a Load Bank can be further defined as a self-contained, unitized, systematic device which includes both load elements with control and accessory devices required for operation.

A capacitive load bank is similar to a reactive load bank in rating and purpose, except that leading power factor loads are created. These loads simulate certain electronic or non-linear loads typical of telecommunications, computer or UPS industries.